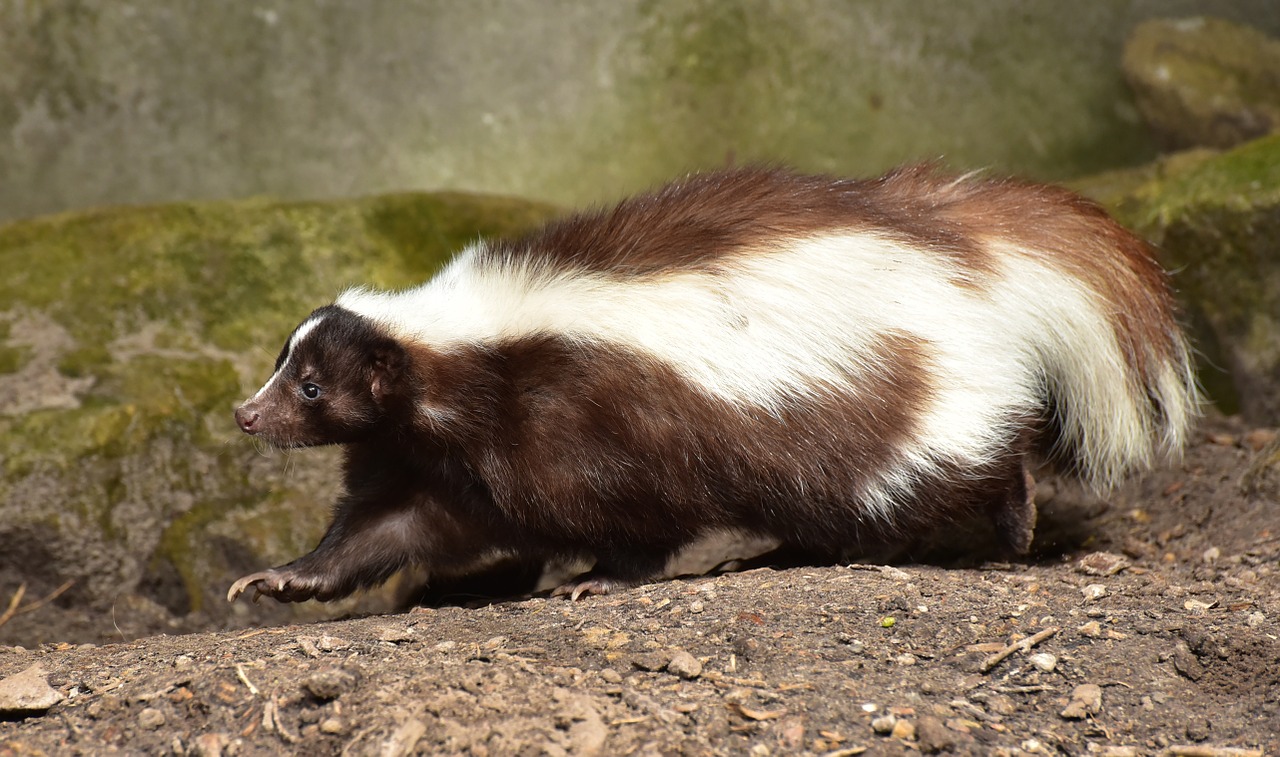 Skunks are generally 20-32 inches long with short legs and an unusual gait. They are known for their bushy tails and black and white stripes although species differ in their markings. Here are a few other ways skunks make their presence known.

Skunks are not aggressive towards people and are beneficial. Skunks are omnivores. It has been estimated 70% of a skunk’s diet is beneficial to people. In the summer insects like grasshoppers, crickets, and grubs make up most of their diet.

There are several ways to identify the presence of a skunk on your property. The most obvious way to identify a skunk is by seeing it. The skunk odor is another obvious sign. Our inspectors also look for skunk burrows, dens, and tracks.

The best way to reduce the chances of incurring a skunk infestation is to modify your home and yard. Secure trash cans, remove pet food from outdoor areas and carefully monitor the amount of moisture around the home, as skunks eat insects and grubs that thrive in moist settings. Homeowners should also attempt to close off possible denning sites, such as under porches or sheds. Keeping pets indoors at night helps prevent accidental spraying.

There are several ways to identify the presence of a skunk on your property. The most obvious way to identify a skunk is by seeing it. The second most obvious sign is the odor from its spray. Skunks are most active at night so you will probably notice other evidence of skunks on your property. You could hear a skunk that has made a den under your porch. You might notice skunk feces or tracks. Finally, skunk burrows and holes are a clear sign of skunks.

Skunks are generally quiet, but they do growl, squeal, hiss, and stomp. Skunks typically use these sounds to signal distress. A pregnant skunk will use these sounds to warn approaching males. Homeowners might hear the tapping or scratching of skunk claws at night because the animals are nocturnal.

They can squeal, hiss, screech, whimper, grumble, smack their lips, and stomp loudly. These noises are used to communicate fear, pain, contentedness, or to intimidate predators. Skunks hiss as a warning before they spray.

Skunks are most active at night. Skunks have long claws so you may hear tapping, scratching, tearing, or rustling.

Another sign is a skunk burrow. Their burrows are often found under buildings, sheds, porches, decks, and even concrete foundations. Dens and tunnels built by skunks are marked by freshly excavated dirt and a strong odor. Holes dug by skunks for food are shallower and just a couple of inches in diameter.

Skunks leave distinct tracks in dirt, mud, and snow. Skunks have five toes on each foot and claws that extend from each toe. The claws make deep tracks on the forefeet and differentiate skunk tracks from that of the common house cat, which can retract their claws. The hindfoot leaves the mark of a heel pad that is usually between two and two-and-a-half inches.

Skunk feces typically measures around half an inch in diameter and between one and two inches in length. Often compared to cat feces, skunk droppings can take on slightly different colors and shapes depending on the weather, the contents of their meals, and the length of time from the initial deposit. Skunk feces generally contains bits of undigested insects, berry seeds, fur, or feathers. Skunk feces can appear similar to raccoon feces but is typically smaller.

Skunks can damage your property by digging and burrowing under structures. They are vectors of diseases like rabies.

The skunk spray is the most well-known skunk danger. The odor left from a skunk’s spray is extremely difficult to get rid of and can damage furniture, flooring, and paint. Skunks use their spray as a last line of defense against predators. The spray’s intensely pungent odor comes from thiol, a chemical compound mainly composed of sulfur and hydrogen.

Skunks are capable of accurately spraying up to 12 feet. The spray is intended to give a skunk cover to escape, but it is not lethal unless ingested in abnormally high doses. If you or your pet is sprayed, it may cause eye irritation, nausea, or vomiting.

Skunks can damage your property by digging.  Skunks will build burrows and tunnels under buildings, sheds, decks, and concrete foundations. These burrows can threaten the structural integrity of homes and businesses, but they also can provide access inside.

Skunk holes differ from skunk burrows. Skunk holes are shallower than burrows and have loosened dirt.

Skunks are particularly susceptible to the rabies virus, which they are then able to transmit to humans or pets. It is important to note that skunks do not transmit rabies through their spray. They are able to transmit the dangerous disease through saliva, most commonly through biting.

What our clients say about us

These guys were great! I called 4 other companies before calling Critter Control. Each company told me they could come out to remove the Squirrel in my house in 1-2 days! Critter Control came out the same day. I was quoted a price, I accepted. They said it may be late, but they will be there to get that Squirrel and they were. True to their word. Two guys came to my house, I directed them to where the Squirrel was and they dived in, took some time, but they got the Squirrel! The next day another great gentleman came by my house to assess the situation and to give us a quote for prevention measures. All quoted prices were very reasonable, plus a 1 year warranty along with great tips and advice. They came back 2 days later and did all the prevention work on my roof to prevent any more Squirrels or other critters from getting into my house. They were true to their word, reasonably priced and just great all-around customer service. From the first phone call, I felt reassured and from the home visit was even more reassured. If you have critters in your home, Critter Control is the company to call!! Top Notch!
LoriToronto
Terry promptly replied and was at my house within few minutes of the call. Very informative, patient and professional. I am very impressed by their service and highly recommend them. Larry and Terry has a very humane approach with extraction process.
VaughanOntario
Contacted Critter Control based on a recommendation of a friend. we needed help with a raccoon situation, Brandon was excellent in explaining the work that needs to be done. he did follow up and inspected the work.
SamuelMississauga, ON
I can’t say enough about Critter Control and Brandon. I had a rat problem and he came to my house multiple times to locate their point of entry, block it off, clean out the rat feces and urine (and some dead rats) and disinfect where they had been entering, and then came back a few more times to make sure they hadn’t re-entered. He returned messages immediately and when I called on a Sunday night after hearing them in the basement, was at my house the next morning to get rid of them. He kept me calm during the process, as it took a while to locate their entry point, and he was very clear in explaining what he was doing. I would recommend them without hesitation.
KellyLeslieville, Ontario